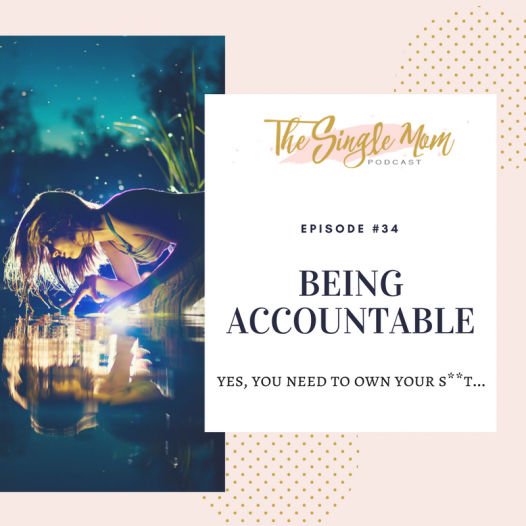 Being Accountable – Yes, You Need to Own Your Shit

Accountability. Seems a simple word really; but in practice it can be difficult at times and sometimes even harder to teach. In my life and in my family it is something that is so very important though. Being accountable for the things we do, the things we say, and how we feel are things that I try to teach my children because they are so very important.

In today’s society I feel that many people have stopped teaching this concept to their children. That they need to be accountable for themselves, in their actions, in their words and all throughout their lives. The world will definitely hold them accountable so why wouldn’t we teach them to hold themselves accountable?

It’s not always easy and quite honestly sometimes it just plain sucks but being accountable for yourself is so key to your success. Going through life with the ability to say “I did that” or “Yes I messed up” or “I will complete this by a certain day or time” and then DOING IT – all very important. Too often it is easier to just let things slide, to just shrug off your accountability and that is where we end up getting into trouble. That is when we start allowing ourselves to shirk our responsibilities.

For my children this is a hard concept to learn – heck it’s hard for ME sometimes. But it is so very important to me that they understand this basic concept of owning your shit. And what I mean by that is if you did it, then you OWN it. You don’t blow it off, you don’t pass it off to someone else – you OWN IT.

My daughter has recently developed a bad habit of whining or pouting about something and then when I call her out on it she says “I wasn’t pouting/whining!” (mind you she is pouting/whining as she says this). Now how are you going to sit there after stomping your foot on the ground and saying in that annoying higher-pitched voice that you don’t want to go to bed that you WEREN’T pouting/whining. That is the very DEFINITION of whining and pouting.

OWN IT! You were whining. Be accountable for your actions. You can say you were whining and then tell me WHY you were, explain to me – TALK to me about what is bothering you, but don’t stand there and tell me you weren’t doing something you clearly were.

Here’s another example – my son was told multiple times to empty the dishwasher. I go into the kitchen to see that it still had yet to be emptied. I say “Son, you still haven’t emptied the dishwasher.” This boy looks me square in the eyes and says “I could have sworn I did. I thought I did it.” But he says it in a way that implies that I am mistaken and that there aren’t any dishes in there. Clearly I MUST be wrong because ‘he THOUGHT he did it’. And he will argue with me even though the dishes are clearly STILL IN THE DISHWASHER.

OWN IT! Be accountable and say “Crap mom, I forgot. I was going to empty them but I must have gotten distracted by the television. I will do it now.” I will happily accept that as opposed to you arguing with me for 15 minutes over the full dishwasher about whether or not you actually emptied it. (Those dishes didn’t magically put themselves BACK into the dishwasher son!)

I don’t expect you to be perfect, but I expect you to be REAL with me AND with yourself. We live in a society where lately it is so much easier to blame others, or your upbringing, or your environment, or your teacher or ANYONE else rather than be accountable for our actions.

Oh you got a bad grade on your test? Maybe it’s because you didn’t STUDY beforehand. That is more likely to me than your suggestion that the teacher just has it out for you or isn’t doing their job. (How often now do we see people blaming the teachers for their child’s bad grades instead of blaming the child? Or instead of the parents holding themselves accountable for not making sure their child studies?)

Oh you are upset because you don’t have the money to buy that toy? Well maybe it’s because you didn’t finish your chores for the week and therefore didn’t earn your allowance and NOT because I am a mean mommy who won’t get you what you want.

Be accountable, own your shit!

As an adult I have to be accountable for my choices and actions. If I don’t hustle and work to get clients, complete work and build my business then I don’t have the money I need to take care of my family. And that is NO ONE’s fault but mine. It’s not the government screwing me over. It’s not immigrants taking my jobs.

I own when I screw up – at least I try to. It’s not always an easy thing, in fact it’s hard as hell to admit when you are wrong or screw up. But it’s important to do it – because THAT is how we learn and how we grow.

As a mother it is my job to prepare my children for a world that doesn’t care about them the way I do. A world where they will likely get kicked in the teeth repeatedly. A world that doesn’t care if they are my special babies or if it hurts their precious little feelings. I wouldn’t be doing my job if I didn’t prepare them to the best of my ability for that.

Sometimes it means that I have to hold myself accountable in areas where I REALLY don’t wanna! For example, when I tell my children that their rooms are disasters and mine isn’t far off from one…well guess who has to clean their room too! Yep – THIS GIRL! If I want my children to have accountability, then I damn well better have it too. And sometimes that sucks as well.

Being Accountable – Yes, You Need to Own Your Shit