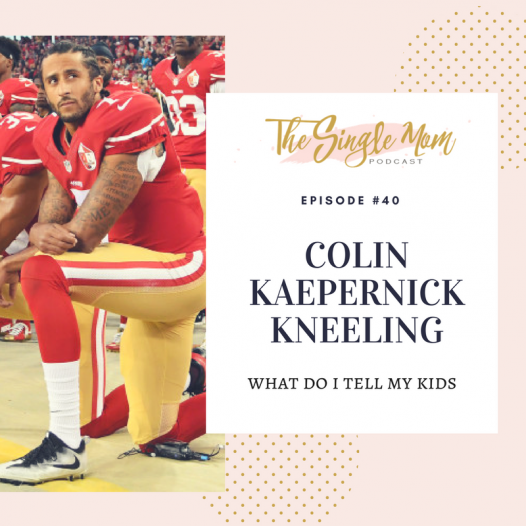 Colin Kaepernick – What Do I Tell My Kids?

What do you think about Kaeperkick not standing?

Unless you have been living under a rock somewhere you know about the recent to-do involving San Francisco 49er’s Quarterback Colin Kaepernick not standing during the National Anthem.

Kaepernick stated in an interview later his reasons for not standing –

Since his decision to sit during the National Anthem there have been many who have spoken out both for and against his decision. Those who are against his choice have been, let’s just say – colorful in their comments against him. Many who say an athlete who makes millions of dollars shouldn’t or can’t say anything about being oppressed or injustices.

However, there are many people who feel that Kaepernick is justified in his protest. Using his platform to bring attention to an ongoing problem in our country. Keeping the discussion and awareness current to try and bring about much needed change.

There are others still who may not agree with him not standing but they agree with his right to do so! Including many veterans who started the #veteransforkaepernick that started trending across the internet.  Many of whom have stated that they fully support him in his actions.

President Obama even stated his support of what the pro-athlete has done, stating that he is exercising his constitutional right. Which of course made many conservatives in this country practically stroke with outrage.

Jim Wright an author and vet who posted an essay on his Facebook page with his response to the issue which has since gone viral also supports Kaepernick.

“IF Kaepernick doesn’t feel his country respects him enough for him to respect it in return, well, then you can’t MAKE him respect it.

You can not make him respect it.

If you try to force a man to respect you, you’ll only make him respect you less.

With threats, by violence, by shame, you can maybe compel Kaepernick to stand up and put his hand over his heart and force him to be quiet. You might.

But that’s not respect.

It’s only the illusion of respect.”

What do you tell your kids about Kaepernick?

I have had several people ask me how I have approached this topic with my children.

“What do you say to them about his lack of respect?”

“Would you allow your children to sit during the anthem?”

“Are you telling them that what he is doing is wrong and unpatriotic?”

Many of my friends think like me and believe what I believe; however there are many friends and even family who are a little more – a lot more – conservative than me. Knowing that about me I am not sure why they would think I would agree with their line of thinking but…

I applaud what he is doing. I think it is important for my children to understand that in this country they have the right to protest. They have the right and even a responsibility. That should they feel that passionately about an injustice or a cause that they should feel that they can in fact protest.

Here’s the thing – he didn’t break any laws, he wasn’t staging a violent protest, no one was harmed and no property damaged. If by staging his protest, by simply remaining seated, he was able to bring attention to the issue that he feels are important then I fully support him.

This country was founded with the principles that it’s citizens can question the government and those who run it whenever they feel the need. Our Constitution is written for that sole purpose. Kaepernick has every right as a citizen to sit or kneel or stand on his head for that matter while the Anthem is played.

To tell him that he shouldn’t or that he is disgracing those who have served or fought for this country is ridiculous. Those who have fought and even died in service of our country did so in defense of all it stands for.

In fact, all service members take an oath when they enlist that include the phrase ‘I will support and defend the Constitution of the United States against all enemies, foreign and domestic’. Meaning that they serve to protect the rights of every citizen of this country and whether you like it or not that includes the right to sit in protest during the playing of the National Anthem.

Colin Kaepernick – What Do I Tell My Kids?