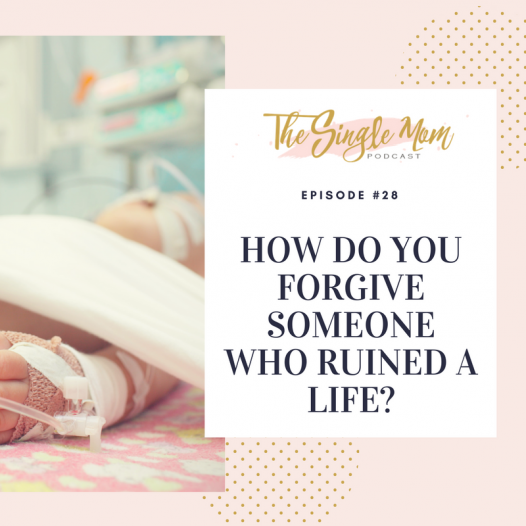 How Do You Forgive Someone Who Ruined A Life?

How do you forgive someone who ruined a life? If you have been following my blog for a while you know that I am the proud mama of two amazing special needs boys: Gage and Connor. Both are Shaken Baby Syndrome survivors and are two of the most important people in my life.

As you may have heard in previous podcasts I mention briefly about my son being hospitalized when he was only 5 months old and that he spent over a month at Children’s Hospital here in Colorado. But I never dove too deeply into what happened to him or how it impacted us as a family.

Gage’s injuries were so severe that the doctors who were treating him were not sure if he would even survive, but if he did they said he would likely be in a vegetative state for the rest of his life. They couldn’t give me any promises or assurances of how he would do either once we realized he would actually be able to leave the hospital.

Gage was in a drug induced coma for several weeks and when he was finally able to come out of that coma he did so without any of the basic skills that babies are born with. He didn’t have a sucking reflex and had to be ‘taught’ how to nurse from a bottle again.

When he finally was able to leave the hospital he had to endure months and months of physical and occupational therapy to be able to hold his head up, sit up, walk, talk and all of the other things that babies normally learn all on their own. These things no longer came naturally to him because his brain didn’t process things the way it was supposed to anymore.

Growing up his life has been a series of constant challenges. He has had to work three times as hard to accomplish things that would seem easy to other children. We have dealt with sensory integration issues, behavior issues, anger issues and more… things that “normal” children don’t have to even think about or figure out how to work around.

All of this would be bad enough had it been some stranger, or child care worker who had done this to my child but it is even worse when it is your child’s father. The one person in the whole world other than you who should have your child’s best interests at heart. It’s even more devastating at that point.

Having to go to court and defend yourself to lawyers, police officers and social services for leaving your child with the one other person in the world that your child should be the safest with. I fought for 2 years with social services to gain full custody of my children, not because I was a threat to them but because I had to prove that I could care for them as a single mother. (But that’s a post for another time).

So how do you go about forgiving someone for something so horrible? I ask because I haven’t found the answer yet. I look at my son and all of the challenges that he has faced and I can’t help thinking ‘what was your life supposed to be’.  My son wasn’t born with a disability it was something that was done to him. He was a perfectly healthy baby who had his whole life turned upside down before it ever really had a chance to begin.

I look at him and every time I see him struggle I get angry inside at the person who did this to him. As I sit here in the Children’s Hospital Neurology Clinic (again) for yet another evaluation I get angry. While I wait to hear from the doctors what concessions will need to be made for my son because as he gets closer to 18 we have to plan for a life where he won’t be able to care for himself.

Knowing that my son could have – and SHOULD have – had a different life than the one he has now fills me with so much rage toward his father. I know that it isn’t healthy and many people have said that I need to learn how to forgive.

I don’t know how. I haven’t figured it out. I may never.

So I guess all I can do right now is continue to be there for my son, do everything in my power to empower him to succeed. Maybe the forgiveness will come in time – but I’m not holding my breath.

How Do You Forgive Someone Who Ruined A Life?