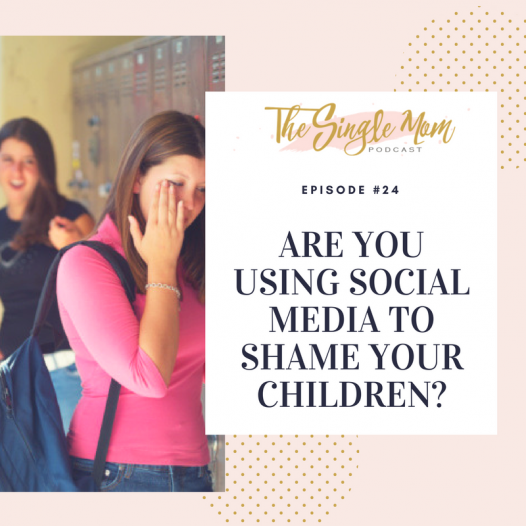 Are You Using Social Media to Shame Your Children?

Today’s Single Mom Podcast discusses a topic that has really started to bother me lately. As a parent I completely understand that there are times when our children will push us to our absolute limits. Times when we will be so angry that we have to walk away from them and count to eleventy-billion before we can even think of speaking to them again. Often times this will result in the child being grounded or punished in some form or another.

However, there has been a steady increase over the past few years of parents utilizing social media to dish out what some are calling tough love and others call emotional abuse. Parents who take to Facebook or YouTube and post videos of them basically humiliating their children for all the world to see.

A few years ago you wouldn’t have seen anything like this going on, but it has become a disturbingly recurring subject on my social media feeds. The first one I remember is of a gentleman who had seen his daughter post a letter to him on Facebook basically being a spoiled brat and complaining about having to help around the house. He read her letter on the video and then after talking a bit more to make his point to his daughter he then shot her laptop.

This one actually didn’t bother me so much because he didn’t put his daughter on the screen, he didn’t call her names or try to degrade her – what he did was speak to her in the same fashion that I would my own child if they were being disrespectful. Now personally I wouldn’t have shot the lap top, I would have kept it for my own OR given it away to a child in need of one instead – one who would have appreciated it in a way that his daughter didn’t seem to. But hey, it was his property to do what he wished with.

Lately though I have seen parents recording videos of their children where they stand them up with signs stating what they did wrong, yelling at them and even calling them names. Degrading them on camera and then posting in online for the whole world to see and comment on.

It appears to just keep getting worse, almost as if it is some kind of sick contest to see which parent can out do the other or get the most likes on their videos/posts. They seem to thrive on those who give them positive feedback as if the need the validation that they are ‘doing the right thing‘ by treating their children like that. I understand wanting to give your child tough love and feeling like the only way to get through to them is with extreme measures but this? This is something that I simply do not understand or condone.

The internet is FOREVER people. Once you post something online you can’t ever take it back. These poor kids will have this potentially haunting them forever. Other kids may see what was posted online and use it to further embarrass or degrade them. Basically these parents have turned into the type of person that we try and protect our children from.

Think about it, if someone else was recording your child being teased, bullied or embarrassed and posted it online as a parent you would be mad as hell about it. For some reason though these parents have justified doing these things to their kids because they are the parent – which doesn’t actually justify it because AS parents we should be better than that.

What kind of example are you setting as a parent by doing this to your child? You are showing them that it is ok to degrade and embarrass others. We live in a society now where when our children witness injustices or bullying they now take out their phones to record it rather than actually stepping in and helping. For example when this kid was beating up a blind kid. A BLIND KID! – there was a group of children just standing and watching while another was recording the whole thing. Thankfully another kid stepped in to help the blind teen who was being attacked.

As parents though maybe if we stop using video and social media to ‘punish‘ our children and teach them it’s okay to embarrass and degrade others then MAYBE they will not in turn think they can do it to others. So please for the love of your children, stop using social media as a platform to embarrass your children into submission. Try grounding them, taking away every piece of electronic equipment they have, make them do community service ANYTHING other than social shaming.

Are You Using Social Media to Shame Your Children?