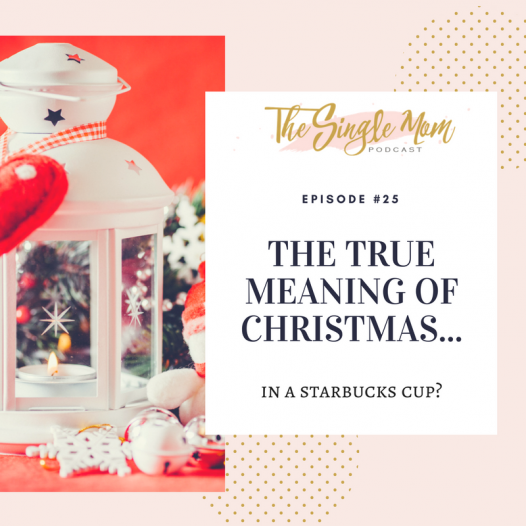 The True Meaning of Christmas in A Starbucks Cup? [Podcast]

Unless you have been living under a rock you’ve probably heard about the recent strike in the ‘War on Christmas’. That’s right! Yet another company is guilty of taking the ‘Christ’ out of Christmas. Starbucks recently unveiled their holiday cup and apparently there is a bit of an issue with it.

That’s it, nothing more – just red. Now for most of us rational and non-nut bag people this is not an issue. Red cup with a green logo, that’s pretty festive to me. (Maybe next year they can make it plaid – I like plaid.) In the past Starbucks has had cups with reindeer, snow flakes, ornaments and such as decor on their mugs. This year they went with something basic and yet still Christmas-like. Just plain red.

There were a few people that appeared to have a problem with this. One gentleman took to YouTube to express his distaste of the new cups and the internet blew up.

“Do you realize that Starbucks wanted to take Christ and Christmas off of their brand new cups?”

Joshua Feuerstein has decided that Starbucks wants to remove Christ from the holiday. He says that they won’t even let their employees say Merry Christmas. So he suggested instead of boycotting them people should go and BUY coffee there. And when they ask for the name give their names as Merry Christmas. Thereby ‘tricking’ Starbucks employees into saying “Merry Christmas”.

There have been many responses to this cup controversy

… but Ellen’s response is by far my favorite!

“Now this holiday season if you want Christmas with your breakfast you’re gonna have to do it the old fashioned way. You’re going to have to get really really high and then you have to go to IHOP and just stare at your pancakes and ‘I see baby Jesus in there’ …”

Now let’s step past the fact that Starbucks has never professed to be a Christian company. And the fact that they have never had any specific religious images on their cups in the past. And instead focus on the real issue here. How a coffee cup could possibly dictate one’s religious beliefs. Is the removal of holiday images from this paper drinking container really going to cause people to turn away from their faith?

Is it possible for one company to wreak havoc on an entire belief structure simply by what images they do or do not print on their merchandise? Is your faith so flimsy that a coffee cup could make you question it? Holy shit! Starbucks has some serious power!

As a non-religious person I do not take ANY offense at the extensive amount of religious paraphernalia that I am bombarded with this time of year. The manger scenes. The religious references in Christmas songs. The constant barrage of images of Jesus on the cards I get in the mail. WHEN WILL IT END!!! (insert sarcasm here)

Non of these things offend or bother me. And none of them make me feel a sudden urge to convert or start going to church. So how would the removal of those things cause you or anyone else to STOP believing? Is your faith so easily shaken? Would the removal of any or all those items make you forget why YOU celebrate the holiday? I doubt it.

So Starbucks removing holiday imagery from their cups shouldn’t either. It’s not as though they had a giant cross on all their items and decided to remove them due to public scrutiny. No. They made the cups red. Nothing more, nothing less.

How about as Christians, instead of worrying what a company prints on their products you worry about the things that actually matter instead. Homelessness, poverty, hunger, famine, the wars that are being fought, the soldiers who are being ignored, the refugees who need help…

As a nation we spend so much time focusing on trivial things and imagined slights that we often miss the bigger picture. So instead of worrying about what is on your coffee mug maybe spend some time being thankful for what you have. Focus on the good in your life and help do good in another person’s life. Remember that no matter what your belief structure is – the base of it is likely love and compassion. THAT is what the holiday is supposed to be about – not what is printed on a paper cup.

Oh and for the people who are ‘tricking’ Starbucks into saying Merry Christmas – I’m certain Starbucks is just fine with that. Their profit increase thanks you!

The True Meaning of Christmas in A Starbucks Cup? [Podcast]