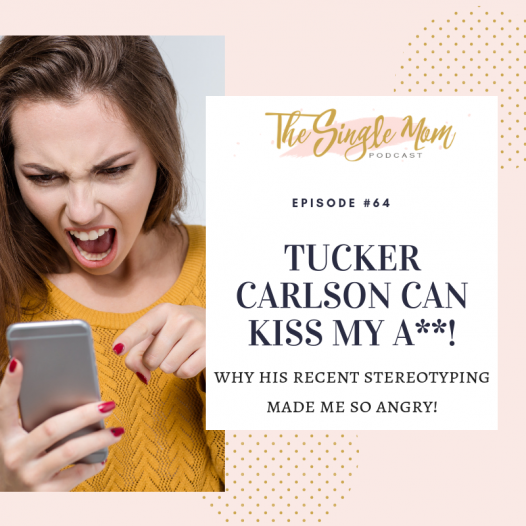 Stereotypes & Why Tucker Carlson Can Kiss My…

If you know me, or have listened to some of my podcasts, you know that one of the things I dislike more than most anything is stereotypes.

I do not like it when people put other people into a certain box, or judge them based on preconceived notions. Assuming they know a person’s situation before actually getting to know them.

This happens all to often to single mothers. I personally have experienced the following stereotypes:

And there have likely been more over the years.

So it stands to reason that I would absolutely despise when people just put stereotypes of single moms out there in the world. Especially people with large platforms.

Recently on his show Tucker did a piece on ‘Men in Decline’. In this piece he talked about how women were less likely to marry men who made less money than they did.

How they SHOULD want to marry them but they more than likely don’t.

Now, setting aside the insult that women are all apparently money hungry gold diggers, only interested in what a man earns. (I mean god forbid we marry for something as stupid as love.) It was his next statement that REALLY got my attention.

“Over big populations this causes a drop in marriage, a spike in out-of-wedlock births and all the familiar disasters that inevitably follow. More drug and alcohol abuse, higher incarceration rates, fewer families formed in the next generation.”

A spike in out-of-wedlock births and the familiar disasters that inevitably follow.

That my friends is a dig as single mothers and yet another stereotype of the children raised by single mothers. And yes, I know that there have been studies about it, and yes I know that it can and does happen.

I also know that there are thousands of children raised by single moms who defy that stereotype. No jail time, no drug habits, no alcoholism.

I also know some kids who grew up wealthy in two parent homes who ended up REALLY messed up. In fact, one study found that children in suburban, upper-middle-class families were actually more likely to use drugs and struggle with emotional problems thank kids in inner cities with struggling families.

Oh a single dad learned how to do his daughter’s hair – let’s make him go viral! Meanwhile here I am french braiding my daughter’s hair while simultaneously holding my phone with my shoulder calling my son into school because he has a fever of 103. WHILE the sheets he threw up in last night are running through the washing machine. All before 7 AM.

SINGLE MOMS DO THIS STUFF ALL THE TIME!!!!

WE don’t go viral, WE don’t usually get accolades from – well, anyone. Why are single dads not stereotyped the same way single moms are?

Does anyone go around telling single dads that their daughters will probably end up drug addicts? Or prostitutes? Or in jail? Are single dads called sluts? No?

So why is that special judgement saved for us single moms?

But the biggest reason these stereotypes bug me so much –

Is because sometimes when we hear them so many times, we can start to buy into them. We start thinking that we MUST be what they say we are.

We start thinking we will ALWAYS have to struggle or be on government assistance. Maybe it is our lot in life because we are single moms.

That is why those stereotypes do so much damage. And they are bullshit!

Don’t buy into them. Don’t listen to them. The struggle may be hard but you will not always have to struggle.

You can set and achieve goals. You can find a way to make an amazing life for yourself and your kids. So tell people like Tucker Carlson they can shove their stupid stereotypes – you and your kids will be just fine!

PS. I actually give kudos to single dads just as much as I do other single moms. Any parent doing it on their own deserves all the praise in the world. So please don’t think I was picking on single dads. They are awesome too.

Stereotypes & Why Tucker Carlson Can Kiss My…