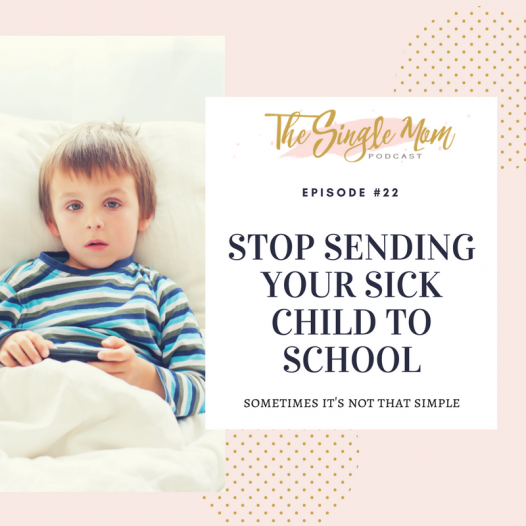 Stop Sending Your Sick Child To School! (It’s Not That Simple)

In today’s podcast I talk about how recently one of my lovely children brought home a nasty little bug that they happily spread around to our entire family, not once but twice! Yep that little germ decided that it was having such a good time making us feel yucky that it stuck around for a second round of phlegmy shenanigans.

Now I am fairly certain that this pesky germ was introduced to our family from one of their friends from school. There have been a multitude of sick kids in my daughter’s class as well as at my sons’ high school; children are just little walking petri dishes. This is normally where you see people posting about how people should keep their sick kids home so they don’t make everyone else sick. If you were expecting that kind of a rant then you should stop reading at this point.

I am not one of those people who will complain about people sending their kids to school sick, because I have in fact in the past sent my children to school sick. Yep, I have dosed my child with cough  medicine and Tylenol and sent them on their not-so-merry ways all the while hoping that they remember to cover their mouths when they cough and to wash their hands.

Now, before you start going into spastic fits of parental outrage, let me explain why I did so and why I do not fault other parents for doing the same.

Not everyone has the luxury of being able to stay home when their children get sick.

Wait – did I just say ‘luxury’? Yes – luxury. While it may not seem like it at the time, while you are wiping snotty noses and faces, trying to keep fevers down or holding back hair while your child pukes up everything they just ate – it is in fact a luxury to be able to do these things.

You see the reason that I don’t judge or get angry at those parents who send their children to school still fighting off whatever germy has happened to infect them that week is because I know that not everyone can afford or are able to take time off to stay home with their child when they are sick.

Many parents out there, both single and two parent households, are just one unexpected bill or one missed day of work away from not making it. As a single parent my budget was always extremely tight and many times I was robbing Peter to pay Paul. So when I had to miss work because my child was sick, it caused a huge problem with my finances.

Working from home allows me that luxury of being able to still earn a living while my child is home sick. I am able to take care of them AND still work. Not everyone can do that, and not that long ago I couldn’t either. So yes, I was one of those parents who sent their child to school sick just praying that they would be able to make it through the day, because I couldn’t afford to lose my pay OR even possibly my job.

And YES I am aware that if people didn’t send their children to school sick, other kids would be less likely to get sick as well. However, even if every child who was sick stayed home and didn’t go to school – they would STILL get sick. I mean let’s be real here, the only way to keep kids from catching things is to isolate them and put them in a bubble.

They’re gonna play with their friends, they are gonna touch a surface with germs on it – hell for a period of time my son would lick everything he came across. (Yes, I know it’s gross – he’s a boy and I couldn’t watch him every second.) And here’s the other thing – for most children getting sick every now and again is a good thing. It’s how they develop stronger immune systems, their bodies need to learn how to fight off germs and they do that by catching the germs.

Which is one of the reasons that my children have not gotten the flu shot for the last several years. Now don’t start jumping all over me again – I am not anti-vaccine, I believe all children should have their shots for all the biggies – measles, mumps, polio, etc.

However, the flu shot is not something that I feel they need every year – but there are some who have lower immune systems, poor respiratory health and so on for whom the flu could actually be fatal. For those people it is VERY important that they get the flu shot, because it could save their lives.

My children DID get the flu shot when they were infants and toddlers when their immune systems were still young and getting the flu would possibly be fatal, however now they are older and do not get the shot. Neither do I. And we have yet to catch the flu.

We don’t get sick often and when we do it takes a pretty super-bug to knock us down (like the one we recently had) but even that doesn’t knock us down for too long. (Before this last bug hit us it had been almost 2 years since any of us were sick with a cold.)

I also am not an over-sanitizer, I don’t make them sanitize their hands every 15 minutes, I don’t wipe down the grocery carts at the store, I don’t carry bottles of hand sanitizer in my purse. I’m pretty sure that I lived through a childhood without various forms of hand sanitizer just fine and my children are too.

I truly believe that the reason that my children aren’t sick as often as other children is BECAUSE they have been exposed to, AND survived mind you, other sick kids and germs. Your child getting sick every now and again is NOT the end of the world, it really isn’t. Now for some children who do have weakened immune systems or other health problems, I know that being around other sick kids is more serious than for other kids. However, if they are in school there will sadly never be a way for them to not be exposed to germs, again – little walking petri dishes.

So while I understand that no one wants their kids to get sick and feel miserable, maybe stop and take a moment to realize that when parents do send their children to school sick, they aren’t doing it to purposefully infect your children, but because maybe they don’t have another option available to them.

I’m sure that every parent in the world would like to be able to take as much time as needed to get their babies healthy again before returning them to academia, but not everyone can.

So the next time you find yourself complaining about ‘those parents‘ that let their child infect your child while at school, try stopping to realize that you don’t know that parent’s story or why they allowed their child to go to school sick. Maybe show a little compassion and realize that other parents aren’t deliberately sabotaging your child – maybe they just didn’t have any other option.

Stop Sending Your Sick Child To School! (It’s Not That Simple)