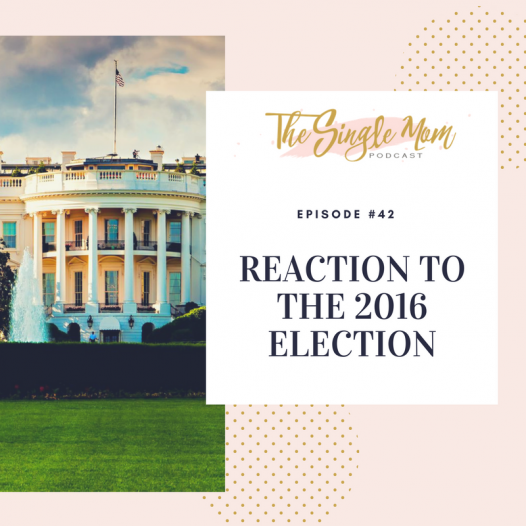 There is no doubt that this election has been the most divisive and ugly election that I and most every one else have ever experienced. There wasn’t just mud slinging and scandal – those happen in every election sadly. No in this election it was much worse. Because in this election we had Donald Trump.

Not only was this man completely unqualified to run for President, he ran the most horrifying campaign that I have ever witnessed. From calling Mexicans rapists, to insulting women and people with disabilities he ran the gambit of offenses. All the way up to having a tape surface of him bragging about assaulting women.

And somehow, this man won.

I spent the better part of the day after the election in utter disbelief of what had occurred. How? How did hate and divisiveness win the highest office in our country? How did a pompous reality tv star get elected to be our next president?

And how – how am I going to explain this to my children? My babies who I have tried to raise to be good people. I have brought my kids up to know that bullying is wrong, racism is wrong, bigotry in all forms is wrong, touching people without their permission and sexual assault is wrong. Yet here is a man who did all of those things, is a GLARING example of all of those things – and he was just elected president.

Now I know that many people simply didn’t want Hillary Clinton to be President. I get that. I understand. She has had her fair share of scandal and problems. I don’t discount them. However, she was categorically more qualified to lead our country than him.

I also know that many people voted for him because he wasn’t a politician and they felt that the establishment was responsible for all their ills in life. So they decided to burn it to the ground.

And I also know that many voted for him because they themselves are racists and bigots and horrible individuals and they felt that he was their champion. And that disturbs me on a very deep level.

But, like it or not, he was in fact elected. So now what? Now what do we do? As a nation we are more divided than ever, a lot of that due frankly to the campaign that Mr. Trump ran. So how do we who did not support him come to terms with this? How do we move on?

Well I for one told my children that no matter what, the most important thing was for them to still be good people. To love others. To include others. To support understanding and not hate. And to stick up for those who they may see being persecuted. To be the good guys and not the bad. To be positive and hopeful. And to hope as hard as they can that Trump doesn’t screw it up.